Please help Indian Summer Camp for Kids with Cancer by taking a quick minute to vote for us in the Chase Community Giving Program via facebook: https://apps.facebook.com/chasecommunitygiving/charity/view/ein/61-1256743?ref=ef59adba41
Your vote could help us win a part of the $5 Million they are giving away! In honor of Childhood Cancer Awareness month, please help us out & vote. You only get 1 vote, but if you share the link, you get an extra one. Don't put it off, voting ends September 19th.
Feel free to pass this email along or share on facebook and twitter. Thanks for your support!

$0.40 off any THREE Campbell's Condensed Soups

$1.00 off Rondele by President Gourmet Spreadable

$0.55 off any Glade Premium Room Spray

Save 75¢ on any Flav-R-Pac / Westpac product We try to not have any bills other than the basic that you have to have- water, power gas.... We don't have cable but we do have internet provided by the cable company. I noticed my bill kept going up a dollar or two every few months. I gave the cable company a call today and nicely told them I wanted to see if I could get a better rate and I got $14 a month taken off our internet bill. I encourage you to call your  provides and see if you can get a better rate too.

$0.30 off ONE Yoplait Simplait™ Yogurt

$1.00 off TWO BOXES of Cheerios cereals

$0.40 off Fiber One Chewy Bars or brownies

$0.50 off one Betty Crocker Shake-N-Pour™ Dessert

$1.25 off Sundown Naturals Vitamin or Supplement

$1.00 off Any ONE Hot Shot Insecticide product

$1.00 off one GARNIER FRUCTIS STYLING Product

$2.00 off 2 packages of KOTEX Natural Balance

Save 50¢ when you buy TWO BOXES (2) any flavor/variety General Mills Fruit Flavored Snacks listed in the info button below.. Expires 9/30/2012.

Save 75¢ when you buy THREE (3) any flavor/variety PIllsbury® Toaster Strudel® OR Toaster Scrambles® Pastries OR Pillsbury® Pancakes. Expires 9/30/2012.

University of Kentucky Athletics has announced it will host “Heroes’ Day” on Saturday, Sept. 8 when the Kentucky football team squares off against Kent State at 7:30 p.m. ET inside Commonwealth Stadium. The event is designed to honor all active, reserve and veteran members of the armed forces along with police, firefighters and first responders.

Among the tentative plans for the day is a football-field sized American flag, which will be presented by the UK Air Force ROTC and UK Army ROTC, a pregame flyover, and recognition of personnel throughout the game and military VIPs in attendance.

UK Athletics invites all active, reserve and veteran members of the armed forces along with police, firefighters and first responders to attend the game. Interested group members who fit the description will be seated together as ticket quantities allow. Each member of the organization with a personal ID reflective of their service will receive a ticket for themselves and a guest, as well as a gift. Tickets will be picked up on game day at a special will-call area after presenting service ID or badge.

Individual tickets may be obtained on game day with the presentation of a service ID at the ticket booth outside Gate 4, while supplies last. Those in the military can reserve tickets in advance through www.vettix.org. See the website for information on how to register your account.

The Kentucky-Kent State game will mark the home opener for head coach Joker Phillips and the 2012 Kentucky football team.

As a dependent of a Soldier who will be deployed, they are allowing Spouses
to go in their place with a guest, so long as they have a VALID Military ID
Pin It 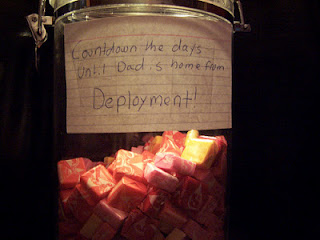 My kids made a countdown jar that will help them count the days until their day returns from Deployment with The Kentucky National Guard. They put a Starburst candy in a jar for everyday he will be gone. Each day one of the kids will remove a Starburst and before you know it dad will be home.

We also have a countdown jar until the last day of school. I am all about helping you Save Money And Stay Home with your kids. This is a great low price way to make lemonade out of lemons.

Did you know? One in every 330 Americans develops cancer before the age of twenty. On the average, 36 children and adolescents are diagnosed with cancer everyday in the United States. On the average, one in every four elementary schools has a child with cancer. The average high school has two students who are current or former cancer patients. Cancer is the leading cause of death by disease in children under the age of 15 in the United States. Childhood cancers affect more potential patient-years of life than any other cancer except breast and lung cancer. The causes of most childhood cancers are unknown. At present, childhood cancer cannot be prevented. Childhood cancer occurs regularly, randomly and spares no ethnic group, socioeconomic class, or geographic region. In the United States, the incidence of cancer among adolescents and young adults is increasing at a greater rate than any other age group, except those over 65 years. Despite these facts, childhood cancer research is vastly and consistently underfunded.

The Story of my sweet Survivor. God is good all the time!